Broken spokes, axles and wagon wheels littered many of central North Carolina’s dirt roads in the early 19th century. In an attempt to improve the state’s roadways, Governor William A. Graham struck out to construct a series of plank roads. Unfortunately, the well-intentioned endeavor lacked foresight, funding and longevity, and the first organized attempt to lay roads in central North Carolina was a bust.

During the mid 18th century, settlers of English, Ulster Scots, and German descent moved beyond the lower navigable portion of the Cape Fear River and into the upper “clay country” of Moore County. However, it would be more than a century before the railroad would make its way into central North Carolina.

In the meantime, transporting heavy supplies inland to homesteaders was a challenge. And, once the settlers had established themselves and created industries including timber, agriculture and naval stores, it was necessary to transport these products to Fayetteville where they would be shipped by barge down the Cape Fear River and out into the world. 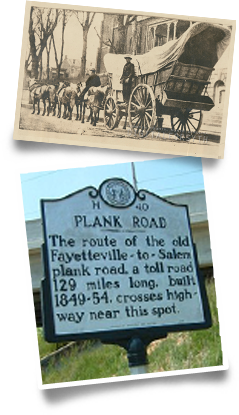 “As of yore, the only dependable means of communication in the interior sections, aside from the age-old custom of walking, was still furnished by actual horsepower – including of course, that also supplied by mules and oxen supplemented by a liberal use of human brawn and much proficient profanity. The roads over which the unwieldy, horse-drawn vehicles of that day had to pass in most instances were little more than trails which first had been blazed by wild animals and Indians,” reported Clem Wrenn in the Moore County News, 1932, about the state of transportation.

In 1849, Governor Graham encouraged the legislature to improve roadways, resulting in a series of plank roads constructed with ingenuity, local resources and brawn. However, the roads did not lay themselves. It was difficult, backbreaking, expensive and tedious work. Clearing the path, grading the roadbed with an elevated center for drainage was just the beginning. Five by eight feet wooden sills were laid for support. Then pine planks eight feet by four inches thick and eight inches wide were laid on top of the sills. On average it took a week to lay one mile of road at a cost of $1,470.

One such toll road — the old Fayetteville-to-Salem plank road — ran approximately 130 miles and was constructed over five years between 1849 and 1854. “The ‘Pioneer Main Street’ served as practically the only means of intercourse between these two far flung sections,” Wrenn wrote.

The plank roads did not hold up well in North Carolina. Built to last ten years, by the fifth year the roads began falling into disrepair. Then, in 1856, The North Carolina Railroad connected the mountains to the coast and with the onset of the Civil War, upkeep of the plank roads was soon abandoned.

The Sandhills Heritage Gateway scenic byways follow roughly the same path of the original plank road in this area, which contributed to the rich heritage of human and economic development that continues to this day.