As you travel along the Scenic Byways and catch the smell of smoke on a gentle breeze, know that you are experencing a major force that not only shaped the landscape you see, but the lives of every living creature that have called this place home. As rain is to the Rainforest, so to is fire to the Sandhills.

Many natural factors played a role in shaping the Sandhills longleaf ecosystem, but no single element has played a larger role than fire. The Southeast experiences 60 to 80 thunderstorms per year, most occurring in spring and summer. When coupled with the right conditions on the ground — including wiregrass and pine straw — a single thunderstorm can spark multiple fires across the entire Sandhills.

Before deforestation and agriculture fragmented the landscape, these lighting-sparked fires would burn unimpeded across tens of thousand of acres. It is now believed that these low-intensity but vast fires burned on average every two to five years and were patchy in their patterns, burning one area cleanly while leaving adjacent patches of vegetation untouched. This left a mosaic of vegetation in different successional stages, a vital key to the Sandhills’ remarkable plant diversity. Through this natural process, the region developed into what ecologists call a “fire climax forest,” a landscape that not only supports natural fire but is dependent on it for prosperity. 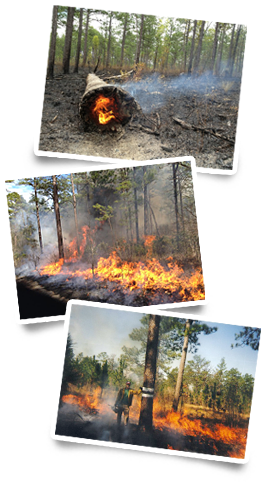 Native Americans harnessed fire for a variety of reasons, primarily to attract game animals, control pests, and to make the forest more manageable for everyday life. This mix of natural and human-induced fires created a forest where virtually all native plant and animal species adapted to fire, and require it for survival.

European settlers were unaware of the positive impact of fire and engaged heavily in fire suppression— which proved to be a monumental mistake. Without fire, the diverse groundcover becomes slowly smothered beneath a thick carpet of pine needles and leaves, and Longleaf Pine seeds are unable to reach the rich mineral soil to germinate. Soon the web of life adapted to and dependent on the Longleaf Pine began to disappear, leading to the extinction of many species of the Sandhills ecosystem.

Today with much research, a renewed understanding of the role of fire in the Sandhills has reenergized active burning programs among state and federal agencies that manage large tracts of public land, as well as among private landowners. Visitors to our area lucky enough to see a burn or the aftereffects should not be alarmed by the sight and smell of smoke in the air or blackened, charred forest floor. Instead, understand you are witnessing a natural process thousand of years in the making, which created the natural wonder know as the Sandhills and which is key to a thriving future.