Sand and Clay, Fire and Water: The Story of the Sandhills/Piedmont Area

Early explorers to the Sandhills region interpreted differently the natural world they found. William Bartram wrote in the 1780s “We find ourselves on the entrance of a vast plain which extends west sixty or seventy miles. This plain is mostly a forest of ‘long-leaved pine,’ the earth covered with grass, interspersed with an infinite variety of herbaceous plants, and embellished with extensive savannas, always green, sparkling with ponds of water.” Others saw a land that “was good only for holding the surface of the world together.”

One common observation by these early explorers was the sound produced as the high branches of the Longleaf Pine caught the breeze and amplified it into a distant but soothing sound, “reminding one of the distant sea.” 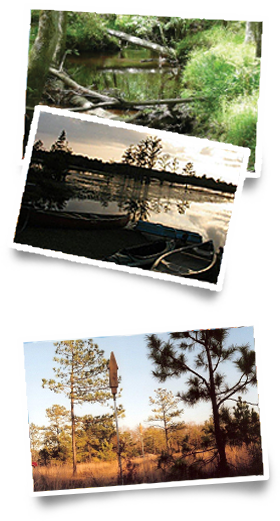 These early explorers were closer to the truth than they realized, as most geologists now agree that, millions of years ago, the Sandhills region of North Carolina was covered by an ancient, shallow sea. Huge primeval rivers, laden with clay and sand eroded from the once-vast Uwharrie mountains, tumbled out of the Piedmont and collided with this ancient ocean, depositing sediment in layers that would eventually become the Sandhills we know today. This combination of deep sand overlaying layers of clay would create a set of unique and extreme conditions that over time would set in motion the evolution of plant and animal communities that adapted to this new natural world.

As a result, this area is home to one of the most diverse ecosystems in the U.S. — rivaling even the diversity of the tropical rainforest. Beneath the mighty boughs of the Longleaf Pine forest, 150 to 300 species of groundcover plants per acre can be found. Sixty percent of the amphibians and reptiles inhabiting in the Southeast can also be found here, along with more breeding birds than in any other southeastern forest type. Combine this richness with the unique species found in the deciduous Piedmont forest and it’s no wonder that our region is what naturalists call “a biological hot spot.”

This unique set of features set the stage for several waves of human settlement, each group perceiving and interpreting differently the natural world they encountered. Some of the first settlers — Native Americans from the Pee Dee culture — travelled up the Pee Dee and Little Rivers, perhaps following the spring shad fish runs, until they reached the “fall line” – a juncture where the Piedmont drops off to the coastal plain, where navigation by river ends, and where pelagic fish congregate. It was here the settlers harnessed the hydropower of the rivers which later powered the grist mills. This was also where Pee Dee Native Americans established one of the most extensive ceremonial centers in North Carolina – the Town Creek Indian Mounds.

Next to appear were English settlers who, in the mid 1700s, travelled the “Great Wagon Trail” from Virginia and beyond seeking cheap land to farm, and settled in “clay country” which is today the world famous Seagrove pottery area.

By the time of the American Revolution, what began as a trickle several decades earlier became a steady stream of Highland Scots heading to the New World, fleeing religious and economic persecution in Scotland. Landing in Wilmington, these folks headed up the Cape Fear River and its tributaries, eventually settling in what had become known as the “pine barrens” (Moore and Richmond counties).

Finding these sandy soils unsuitable for intensive farming, these settlers turned to the pine forest for their livelihood. Exploiting the vast longleaf forest for ship timbers and naval stores (turpentine, pitch and tar), these materials enabled the British to sail longer and further and to create a naval empire that enabled trade around the world.

Because of the limited access to the outside world — Yadkin Trail, now highway 211, was the only way in and out — these piney woods would remain isolated for the next 100 years.

With the arrival of the Plank Road in the 1850s and the railroads in the 1870s, the stage was set for the largest landscape transformation in US history. The turpentine industry, which for generations had been measured by the wagonload, was now measured by the train load and quickly exhausted the forests’ sustainability. What at one time had covered 90 million acres stretching from Virginia to Florida and Texas, quickly was reduced to just 3 million acres of pineland forest.

Much of the labor force for this large-scale transformation was fueled by African Americans who were brought here as servants and slaves and by 1860 made up 22% of the population. These African descendants contributed furniture making, music and folklore to the newly blended culture.

The same railroads that led to the extermination of the Longleaf Pine forests brought the next major wave of human settlement in the1870s. Drawn to the area from major cities of the Northeast, this group of affluent immigrants sought fabled healing properties promised by the founders of Southern Pines and Pinehurst. Tales of ozone produced by the longleaf pine and curative properties of the many mineral springs in the area were eventually proved mythical. However, there was some truth to the legend — clean air, pristine water and unique ecosystems supplied early settlers as well as our own modern culture with a stream of natural resources that sustain and enhance our lives.

Each wave of settlers would transform and be transformed by the natural landscape they settled. Now we — the latest wave of “settlers” to this region — face a daunting challenge to protect the natural resources that remain, and to promote the wise use of our working farm and forest lands. If managed properly, these resources can provide economic opportunities for future generations and result in positive environmental and economic impact, not only for landowners but for this entire region.

We invite you to experience the scenic byways of the Sandhills Heritage Gateway, to witness the sights and sounds met by all those who came before us. If one listens carefully, you might just hear the same sounds our forefathers heard, of Longleaf Pines whispering the sound of ocean waves across the Sandhills and beyond. Explore not only the natural flora, fauna and geology but also the modern day businesses along the byways — remembering all the powerful evolutionary forces that brought us to this very moment in time and shaped every aspect of who, where, why and how we are here. We challenge you to participate in protecting this ecosystem, to support the economic development of land and business owners, and help protect this area for perpetuity. Learn more about what you can do here.